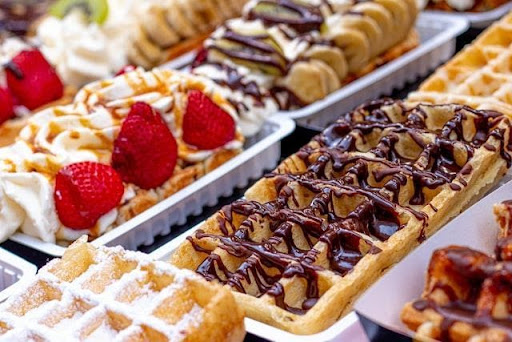 The crisp crunch of waffles coated with powdered sugar, syrup, and melted butter pooling in every dimpled corner is what some would describe as the perfect breakfast. And why not? After all, waffles can be topped with a variety of flavors to suit each individual’s palate. From sweet and tart fresh fruit toppings to savory nuts, delicate whipped cream, to other delectable flavors, you can pretty much pair anything you want with waffles. Seeing as it is a favored dish by many, it’s no surprise to see that some restaurants in Fort Lauderdale also feature waffles in their breakfast menus.

But where exactly did it come from? Who created it? What were the first recipes like? Let’s dive into the history of waffles and how they became one of America’s most beloved breakfast dishes.

From Flatbreads to Waffles

Restaurants in Fort Lauderdale often feature waffles with different flavors. Some are labeled as desserts while some are paired with savory dishes. But did you know that the earliest ancestor of waffles is actually unleavened flatbreads from thousands of years ago? Who knows, maybe they were also paired with all kinds of flavors even then?

Sometime later, the Ancient Greeks started making their own version of flat cakes and called them obleios. These were cooked between two metal plates that are heated. But unlike modern waffles, these plates didn’t have the iconic grid design just yet. From then, the waffle’s characteristic honeycomb pattern was born in Europe. Although no one knows exactly who invented it, one legend claims that it was a medieval knight. According to the legend, a knight went home after a hard day at work and accidentally sat on an oatcake while still dressed in armor. Because of this, a grid pattern was left on the bread and the rest is history. The legend may be a fun story to tell, but it was most likely a medieval blacksmith who actually invented the grid pattern of waffles.

The Birth of the Waffle

In 1620, Dutch pilgrims brought “wafles” with them on their journey but it wasn’t until 1735 when the word “waffle” officially appeared in print. After that, Thomas Jefferson returned to the US in 1789 after a trip to France. He brought with him many French recipes along with a long-handled waffle iron. From then, waffle parties became common in the South in the 1800s where guests enjoyed waffles with all sorts of toppings. In 1869, the patent for the first waffle iron in the US was received by Cornelius Swarthout of Troy, New York. He was of Dutch-American descent and the date when he received the patent became National Waffle Day (August 24).

A commercial electric waffle iron was eventually created by Thomas J. Stackbeck in 1911 and it became a staple in American kitchens in the 1930s. But in 1953, the Dorsa Brothers introduced frozen toaster waffles called “Froffles” which were sold in supermarkets all over the US. Eventually, the name was changed to “Eggos” in 1955 because everybody called them that way due to their eggy taste. Kellog purchased the brand in the 1970s. Finally, Belgian waffles made their debut at the New York World’s Fair in Flushing, Queens in 1964. The recipe (which was supposed to be for Brussels waffles) came from Maurice Vermersch’s wife. To make it more marketable, Maurice changed the name to a more familiar country.

So there you have it, that’s all we know about waffles. Now, if you’re craving for some, why not try our version at Tower Deli. We are a restaurant that also offers catering in Fort Lauderdale. Visit our restaurant today and try some of our delicacies.